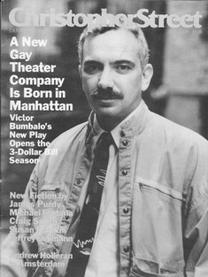 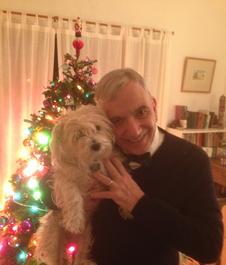 ADAM AND THE EXPERTS opened to critical success Off-Broadway and has had numerous productions in the United States and Canada.

KITCHEN DUTY and AFTER ELEVEN have played throughout the United States and England.

QUESTA premiered in Los Angeles starring Wendie Malick, Dan Lauria, and Dorian Harewood and has had productions in Chicago and New York.

VICTOR BUMBALO is an award-winning playwright whose plays have been produced worldwide and translated into five languages. He is the recipient of an Ingram Merrill Award for playwriting.

Bumbalo was awarded a fellowship to Bennington College where he received his M.A.

His play, NIAGARA FALLS, followed its Off-Broadway run with subsequent openings in over fifty cities throughout the United States, England, and Australia.

A number of Bumbalo's plays are published, including QUESTA, NIAGARA  FALLS, ADAM AND THE EXPERTS, and WHAT ARE TUESDAYS LIKE? by Broadway Play Publishing.  TELL appears in an anthology, Gay and Lesbian Plays Today, published by Heinemann Educational Books, Inc., and SHOW is included in THE BEST AMERICAN SHORT PLAYS, published by Applause Theatre Book Publishers. KITCHEN DUTY and AFTER ELEVEN appear in NIAGARA FALLS AND OTHER PLAYS published by Calamus Books.

He moved to Los Angeles in 1995. Since then, he has written for several popular television series: NYPD Blue, AMERICAN GOTHIC, RELATIVITY, and HBO's SPAWN. He wrote several movies of the week. Along with a partner, Ray Shenusay, he wrote episodes for the children’s show WOW WOW WUBBZY produced by Nickelodeon. Bumbalo co-authored a screenplay with Dan Lauria, THE BOOK OF JOE.

Bumbalo is proud to say he was one of the original members of The Gay Men’s Health Crisis (GMHC) in New York City.For five years he headed a team of volunteers who cared for people with AIDS.

Bumbalo was twice a finalist for the Lambda Literary Award for his plays, QUESTA and NIAGARA FALLS.

After ten years of study, he was fully ordained as a Zen priest in 2004 and is a member of the International Buddhist MeditationCenter in Los Angeles.

He is the founder and president of the Robert Chesley/Victor Bumbalo Foundation, which honors LGBTQ playwrights.